From a news story on National Public Radio yesterday:

“American doctors have been noticing an increase in osteoarthritis of the knee. They have suspected two driving forces: more old people and more people who are overweight.

A study published in this week’s Proceedings of the National Academy of Sciences argues that’s far from the whole story. Even correcting for body mass index and age, osteoarthritis of the knee is twice as common now as it was before the 1950s.

Conventional wisdom is that osteoarthritis of the knee results mostly from wear and tear, which is why, these days, it’s more common among older people and those whose excess body weight puts extra stress on those joints..

“So, going into it, I suppose my expectation was that people in the past, especially early hunter-gatherers and early farmers, would have had a much higher prevalence of osteoarthritis than people do today,” Wallace says. Surely all that running around, squatting, twisting and other activity in the days before cars and couches would have worn out joints quickly.

But that’s not what the evidence showed.

“I was actually extremely surprised to find that [osteoarthritis] is much more common today” than it was in Americans long ago, says Wallace.

This makes sense to Dr. Richard Loeser a rheumatologist who directs the Thurston Arthritis Research Center at the University of North Carolina, Chapel Hill.

“Your joints aren’t just like your automobile tires that wear out as you use them,” he says. In fact, exercise helps nutrients diffuse into cartilage in the knee and keep it strong and healthy.

If cartilage “is formed and more healthy when you’re younger, then your joints are more likely to be functioning better and have less osteoarthritis when you get older,” Loeser says. And exercise also helps fully grown people.

“By strengthening your muscles and by stimulating your cartilage you can still improve the health of your joint,” Loeser says….

Here is the link to the full NPR article.

One of the biggest issues for both road cyclists and mountain bikers is low back pain. This can be debilitating if not dealt with promptly and properly. Often times it’s not an issue, or as much of an issue, when riding on relatively flat terrain, or at lower intensities. But as a cyclist ramps up in those areas any problems are exacerbated.

There are two main causes for back pain in cyclsits: 1) Poor bike fit, and, 2) Muscular imbalance. I’ll leave bike fit up to the professionals who deal with that (such as Lorri Lown at savvybike.com).  The second, muscular imbalance, is  what I’ll offer some thoughts on here.

In the cycling position, a cyclist is always bent forward at the hips. Bio-mechanically this requires more work from your hip flexor muscles (the Psoas especially), and doesn’t allow your hip extensor muscles (the Gluteus Maximus, aka ‘Butt’) to work as much. The flexors get shorter and tighter, the extensors get weaker. This puts a tremendous force imbalance across your low back that can have devastating effects. Couple this with working at a desk job where you’re sitting in a chair on your Gluteus Maximus for hours at a time, with your hips flexors in a short position and this only compounds the effects. 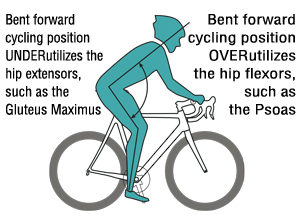 Bent forward at the hips wreaks havoc on the low back.

Interesting article presenting some research into bicycling’s positive effects on kid’s with ADHD and some Parkinson’s patients. Very cool!
http://www.independent.co.uk/life-style/health-and-families/features/the-cycle-path-to-happiness-8422706.html